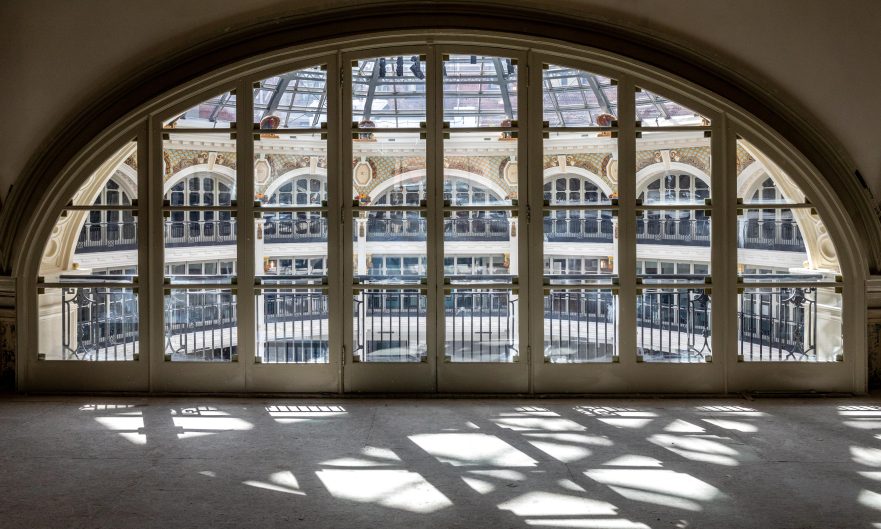 The Hub Powered by PNC Bank at The Dayton Arcade is preparing to add 40-50 private offices. This will bring more workers into downtown Dayton.

A permit to complete the third floor of The Hub is under review. Dayton-based MODA4 Design is the architect firm on the $1.2M project.

“Right now, there are 130 companies operating out of The Hub, said Vince Lewis, associate vice president of entrepreneurial initiatives at University of Dayton and president of The Hub.

That number will increase to 170-180 once work is complete.

The completed project will also provide another classroom and event space that overlooks the rotunda in The Arcade. The classroom with tables will accommodate about 70 people or 100 people if tables are not used.

The Hub opened in March of last year with about 14-15 members from The Hub’s former space on Monument Avenue moving to The Arcade. There were 72 offices at that time.

“We thought we had ample private office inventory,” Lewis said.

It soon became evident there was a need for additional private office space, however, and a waiting list began to grow.

The majority of the newly added offices will be singles that are about 100 square feet, Lewis said.

Coworking space is also available at The Hub but hasn’t proven to be as popular. Classroom and event space at The Hub is in demand as well.

“This semester we have 32 classes with roughly 400 students,” Lewis said.

The largest seating capacity is about 60 people, and that’s after combining two spaces.

“That’s what drove the design and decision-making of the third floor,” Lewis said.

Work should take a few months once the permit is approved and is expected to be completed by the end of the year.

“We’ve had great support from city management to submit an earmark request for the funds, Lewis said. “We are grateful Congressman Mike Turner approved it.”

The Hub is a joint venture between University of Dayton and the Entrepreneurs’ Center that provides coordinated and centralized resources for area entrepreneurs, creators, students and teachers. The Hub was also a catalyst for the redevelopment of The Arcade.

This website uses cookies to improve your experience while you navigate through the website. Out of these cookies, the cookies that are categorized as necessary are stored on your browser as they are essential for the working of basic functionalities of the website. We also use third-party cookies that help us analyze and understand how you use this website. These cookies will be stored in your browser only with your consent. You also have the option to opt-out of these cookies. But opting out of some of these cookies may have an effect on your browsing experience.
Necessary Always Enabled
Necessary cookies are absolutely essential for the website to function properly. This category only includes cookies that ensures basic functionalities and security features of the website. These cookies do not store any personal information.
Non-necessary
Any cookies that may not be particularly necessary for the website to function and is used specifically to collect user personal data via analytics, ads, other embedded contents are termed as non-necessary cookies. It is mandatory to procure user consent prior to running these cookies on your website.
SAVE & ACCEPT